A stormy winter day off! 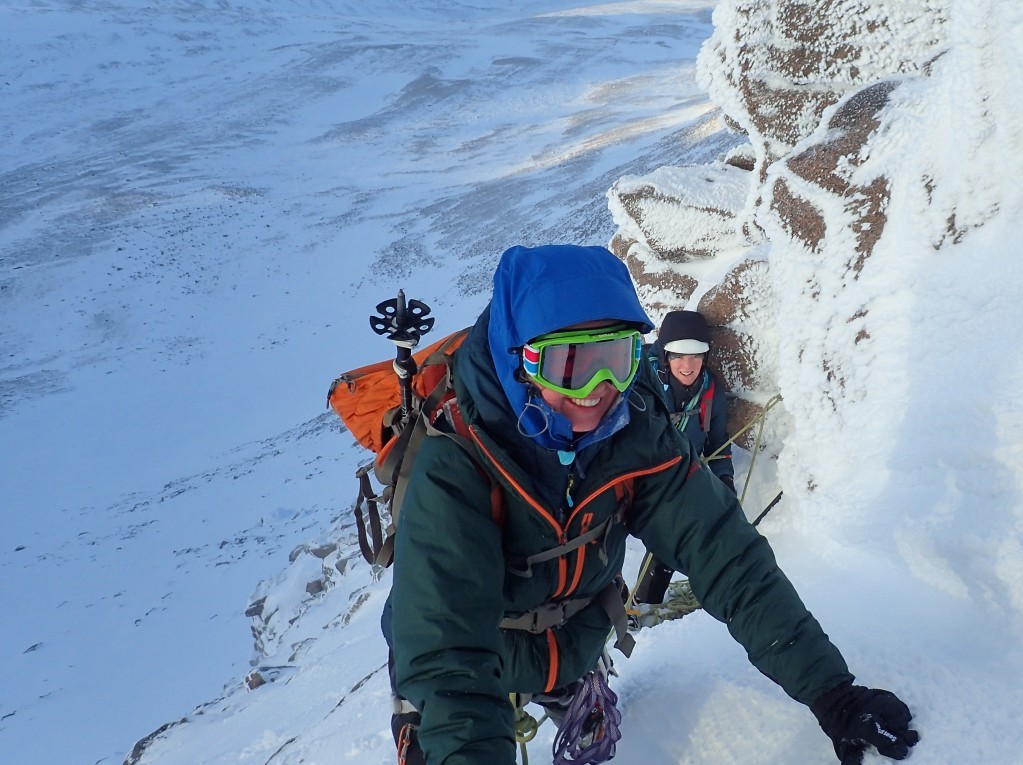 After a busy two weeks in the Cairngorms I’ve finally got a day off! Unfortunately plans to get out for some personal climbing were put to rest with the weather taking a major turn last night, on the plus side I got to have a lie in, every cloud…. 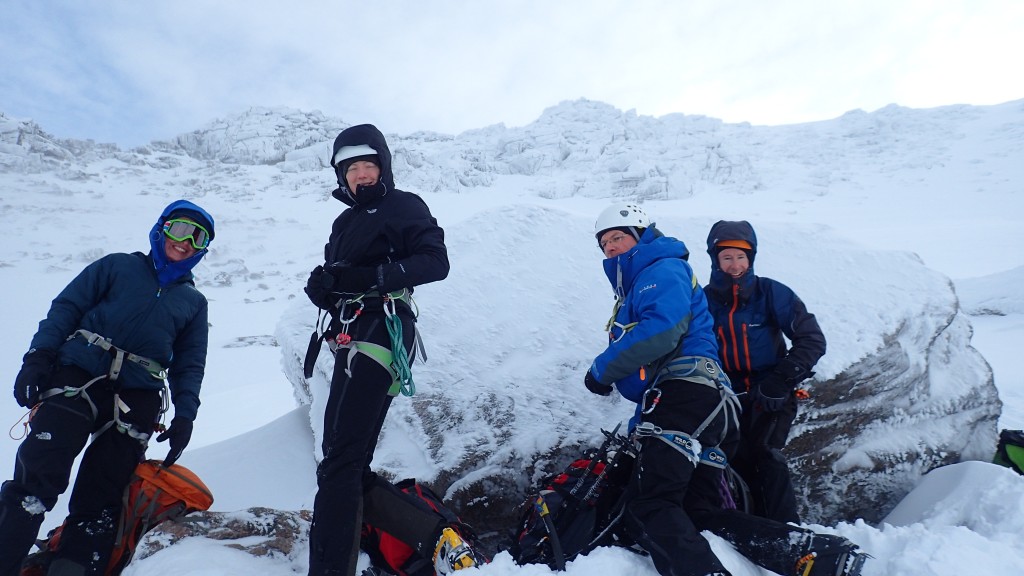 My first stint of work got off to a good start with a five day mountaineering course working for Glenmore Lodge. I have been in and out of the lodge over the years as a student on various courses but this was my first experience of working there. The helpfulness of the staff and the excellent facilities made for a great introduction, despite having car troubles on my first day, and I look forward to hopefully working there again in the future. 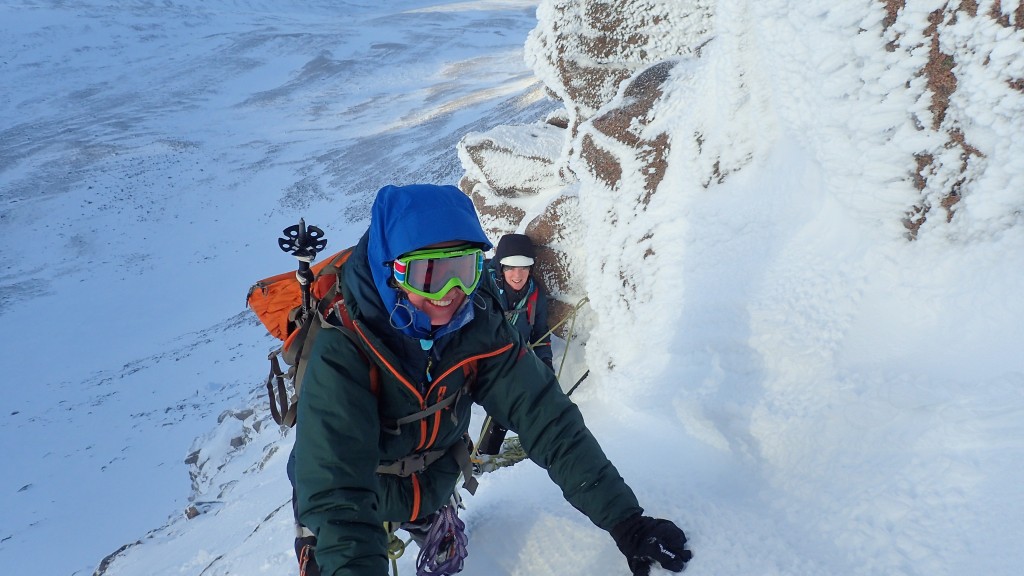 Pitching our way onto the plateau

The week was focused around developing personal winter mountaineering skills, with the aim of putting it all into practice while journeying around the hills. Throughout the course we spent time looking at avalanche awareness and planning, navigation, movement skills, simple rock and snow anchors, and basic rope work. With generally good weather and a mix of venues it was a great week, with some great people. 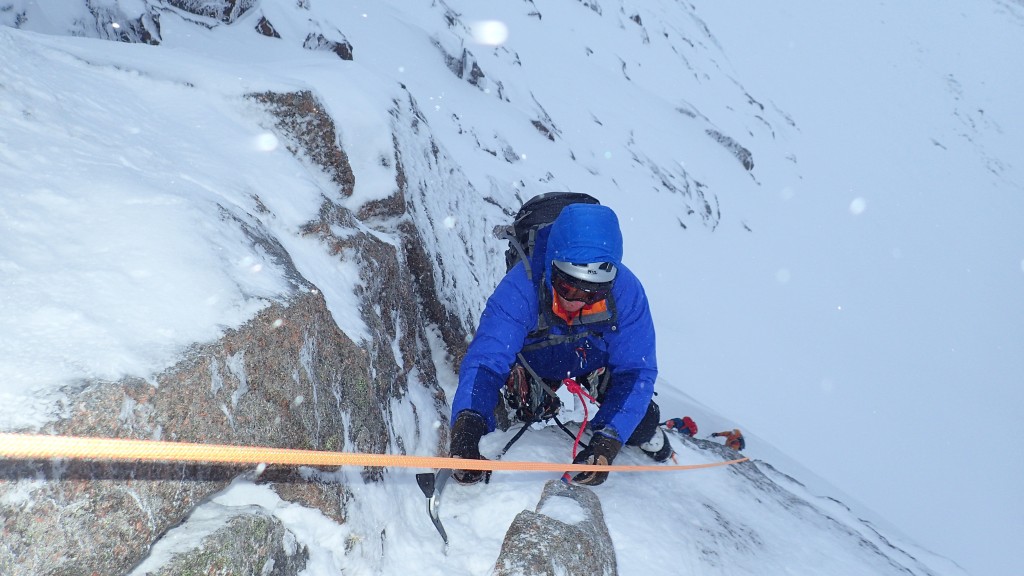 After my week at the Lodge it was straight into four days of work with UUJ mountaineering club. I spent the first three days climbing  with Gareth and John, both had previous winter experience and were keen to try something a little more challenging, so we climbed Hidden Chimney direct, finishing up Yukon Jack, for two great mixed pitches. 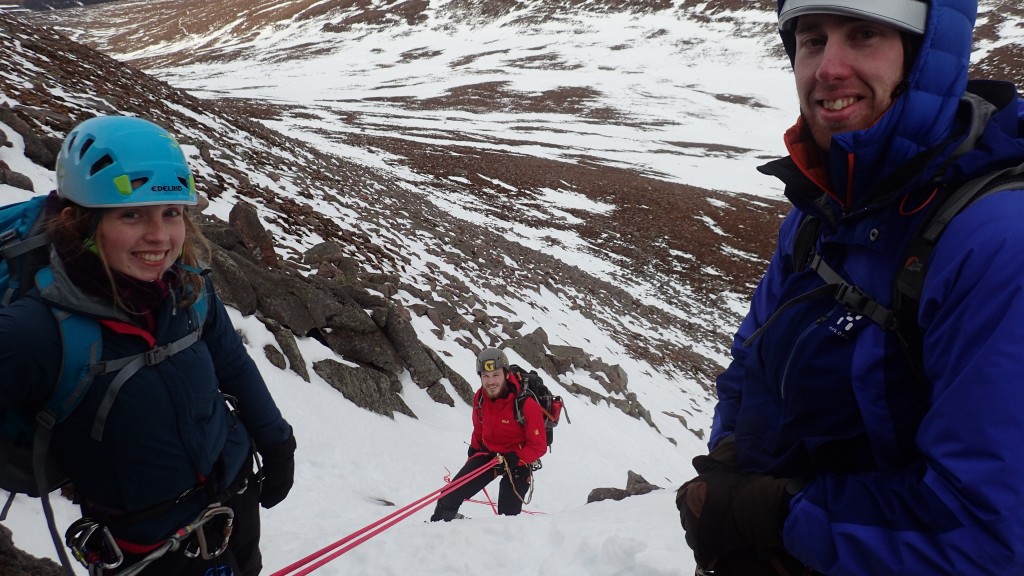 The following day, with high temps and strong winds forecast we headed for the Twins ribs to seek out a little bit of shelter. We were joined by Laura and spent the day revisiting snow anchors before pitching up the start on the ribs and looking at abseil retreats.

Thankfully the bad weather wasn’t to last and the following day we climbed Aladdin’s Mirror direct, before Gareth and John took us to the top for their first winter leads.

For my final day of work with UUJ I was joined by Ross and Nathanael. Neither had done any winter climbing before, but after three days of winter skills were keen to give it a go. We headed for Aladdin’s Couloir and climbed it with a few variations for a great introduction to winter climbing. 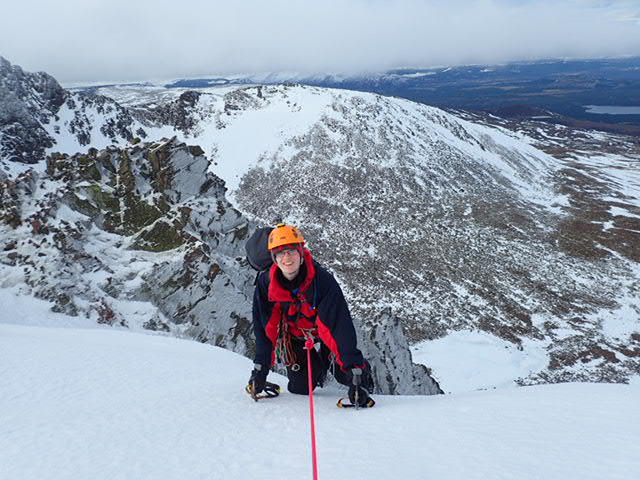 Topping over above Aladdins Couloir

My last three days have been spent working with QUB mountaineering club. This is my old club and every year a do a little bit of work on their winter trip. Its always great to be able to get involved again when I can, and this year I joined them for day two of their winter skills programme before spending two days climbing. 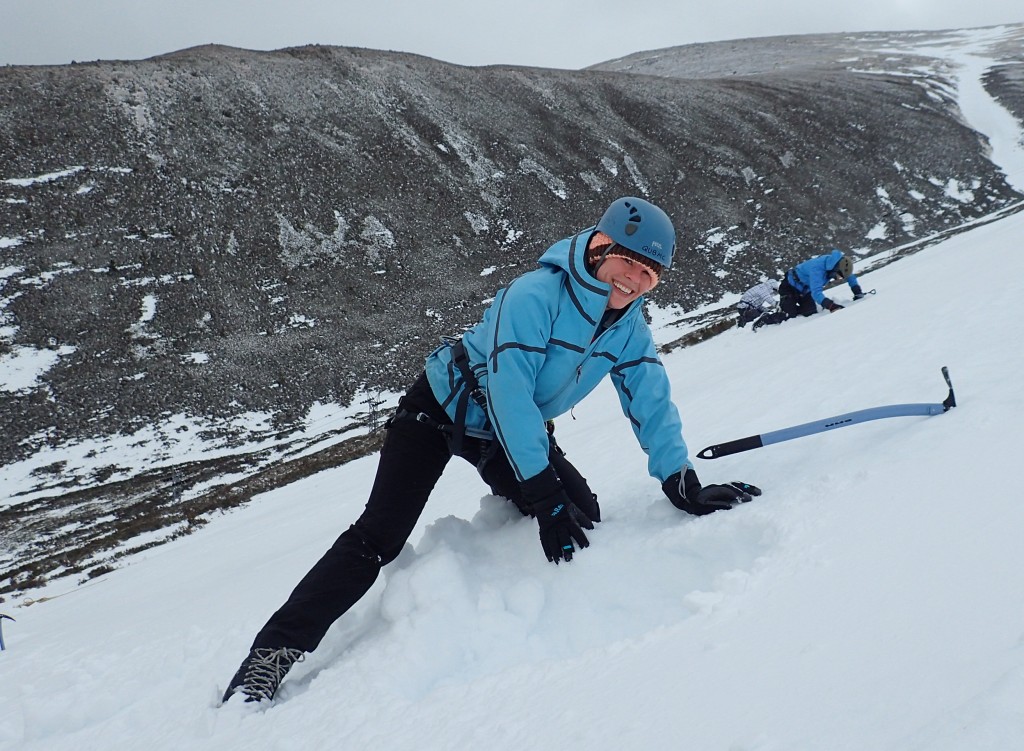 For my first day of climbing work with the club I was joined by Peter and Sarah, who were keen to get on their first winter route. Plan A had been to head towards the Mess of Potage, unfortunately that seemed to be everyone else’s plan too! We changed tact and headed for and empty Aladdin’s couloir finding it to be in great shape with only small amounts of avoidable wind slab at the edges. 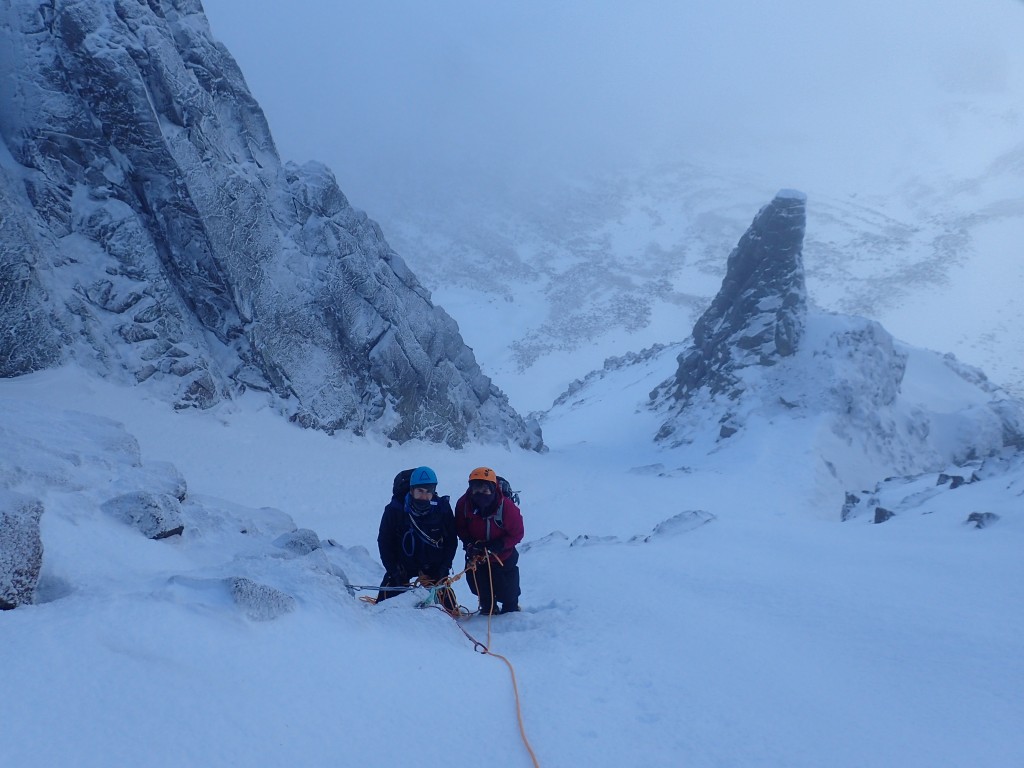 Back in Aladdins Couloir

The following day Peter was back out again and keen to try something a little bit harder. This time we were joined by Liz, who had also been climbing the previous day and was keen to join us on something a little more challenging. We headed for the Mess of Potage, the crag of choice at the moment, and climbed hidden chimney. I have never climbed the top pitch with such little build up before and was pleasantly surprised, a great introduction to mixed climbing for the guys. 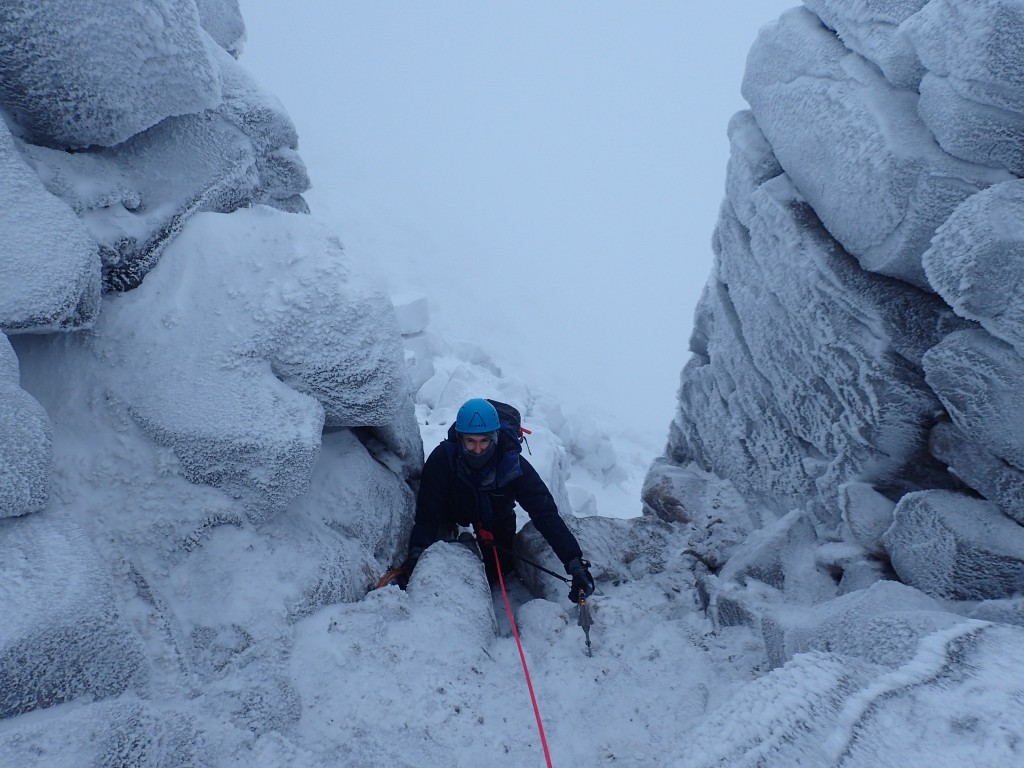 My last day with Queens brought me to the end of my first block of work, and although it felt pretty busy at times it was a great couple of weeks. Next week I am running a five day intro to winter climbing course, and with the weather forecast to settle down here’s hoping it’s another good one!